As cryptocurrencies grew so fast in popularity, employers are frantically looking for potential employees with knowledge in crypto currency and blockchain.

The need for online contract workers with an expertise in blockchain and bitcoin-related spheres drastically increased in the last quarter, says data provided by Upwork, a web platform that is a mediator between freelancers and employers. The bitcoin knowledge and blockchain understanding were the 2nd and 3rd most rapidly growing skills on the platform.

With the price of bitcoin increasing more than 500% for the last year, companies all over the world are looking for ways to gain profit of this hot trend. CME Group, for example, announced the release of bitcoin futures. At the same time, the whole industry is supported by blockchain and evolves around this technology. Besides performing transactions for cryptocurrencies like bitcoin (but not limited to it), blockchain could also help businesses operate in a more profitable, direct and less intertwined way, as the apologists of the technology claim. 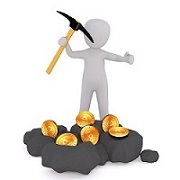 Some other popular skills in the list of the most rapidly growing skills include robotics – first place, in line with cybersecurity specialization, called penetration testing – the fourth place and a subdomain of AI, known as deep learning – takes eighth place.

Upwork estimated the growth rates according to U.S. freelancer billings on its platform during the third quarter in 2017, in comparison with the same quarter in 2016.