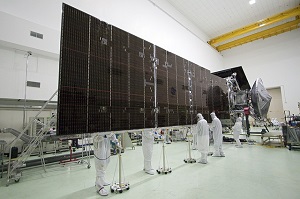 Quantum is no longer the character in science fiction. Nowadays, it is a part of huge progress for the humanity. A satellite, Micius, can perform some quantum–related activities. Specifically, it helped Chunli Bai, the president of Chinese Academy of Science, make a quantum video call. It is safe on a quantum level.

You could have heard about Micius satellite this year, as it made titles about quantum teleportation and entanglement. This satellite is aimed at making a more secure channel of information for Chinese government using quantum mechanics. As for now, the first quantum safe video call was made by Chunli Bai, the president of Chinese Academy of Science, to Anton Zeilinger, the president of the Austria Academy of Sciences in Vienna.

It is similar to a thin line that can handle only two agents on the line. To make sure nobody overhears the call, photons are encrypted. If you entangle photons on a long distance, they have the same link, and if there is someone else on the line, the laws of quantum mechanics will immediately break this thin line. Quantum professionals use this mechanism to create a secure line.

The Micius satellite makes entangled photons move to two stations in Austria and China, respectively. Those photons are coded with so–called polarizations, basically the direction of the light weight for security reasons. Scientists measure the polarizations data and then send back this data, and the satellite processes this data to ensure entanglement was done correctly. After this, the satellite creates special security keys so both stations can use them to encrypt or decrypt data of a video call.

The generated key is for one time use only and for the data in the video call, but it is created due to the laws of quantum mechanics.

It is not about science fiction or something teleport-like, but it is an important step in security systems and technologies, because if this procedure for quantum encryption is done correctly – it is impossible to hack or steal your information. It is impossible to hack but everything evolves and hacking approaches, but for now, it is the most secure connection channel.